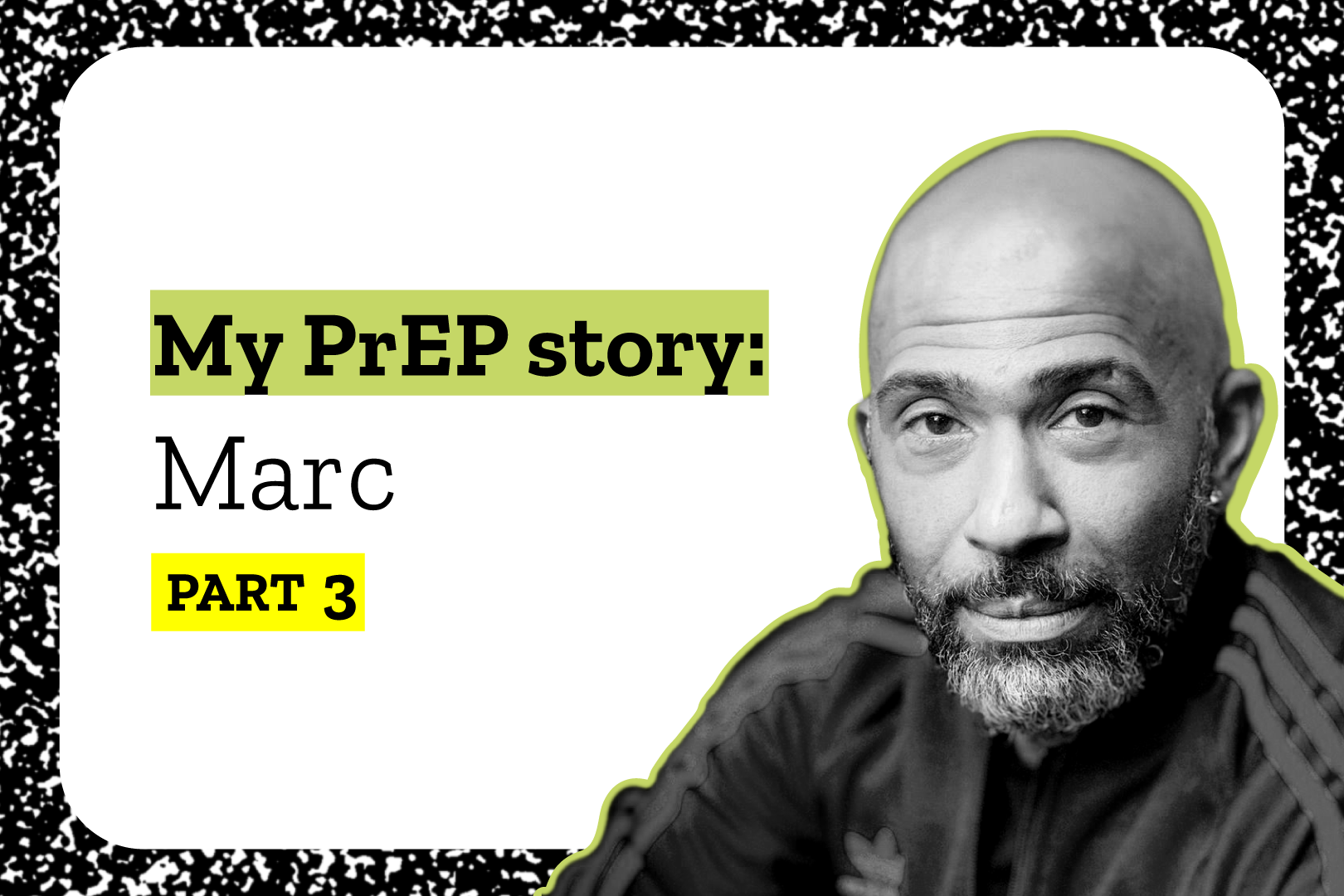 In his third My PrEP Story, PrEPster co-founder Marc Thompson talks about the disproportionate impact of the global COVID-19 pandemic on Black, Asian and Minority Ethnic (BAME) communities, the impact of institutionalised and systemic racism and how fragility about conversations on race may hinder a response.

My team have been on at me for weeks to write a new My PrEP Story (MPS). A COVID-19 special. First it was my view on the new global pandemic from the perspective of a long-term survivor of HIV. Someone who had first-hand experience and a front row seat of the HIV epidemic 1982 – to the present. What parallels could we draw? What lessons have been learnt? Did it trigger me? Easy I thought. I can do that. Yet I sat in front of a blank screen and words didn’t flow.

Then roughly 12 days ago, my social media feeds began to be filled by headlines and threads about the disproportionate impact of COVID-19 on Black, Asian and Minority Ethnic (BAME) groups, both here in the UK and increasingly in the USA. Then followed think piece after think piece, accompanied by the usual false equivalencies and ‘what aboutery’ in the comments.

Suddenly my MPS had a new focus. I fired up my laptop, flexed my fingers and got ready to write about my shock, anger and hurt about how yet again my community of Black and Brown people were being ‘wiped’ out by forces beyond our control. I thought about all the key workers I had encountered and engaged with in the weeks and days leading up to the lockdown and have engaged with on my rare trips out since – (the young Jamaican) bus driver, (the middle aged Black British) shop assistant, (the Pakistani) market traders, (the Nigerian) Uber driver, (the Ghanaian) pharmacist, (the Bengali) clinic receptionist: all from ethnic minority communities.

And I thought about all the Black and Brown people that do the jobs that underpin all of this country’s health and social care services. I wanted to express my feelings that for decades these undervalued people (for behind the numbers and acronyms we are talking about human beings) have been the backbone of all that makes our society move.

I wanted to write about my anger at a Government who had destroyed the lives of 1000s of people in the Windrush Scandal and would then have the audacity to ask people from that very same generation who had built the NHS, many now in retirement, older and therefore considered more vulnerable to COVID-19, to put themselves at risk and return to work.

I wasn’t sure if I should write about a close relative who works for a large NHS trust and has seen first-hand the impact of COVID-19 on the team they work alongside that provide community services: 75% of them women from BAME communities, continuing to support the most vulnerable without adequate PPE.

Or about my friend, a Black gay man who has been an intensive care nurse for over 25 years and is close to retirement, who calls me most evenings after a 12 hour shift in a central London hospital, exhausted and in tears, to talk about all the deaths he’s witnessed of people who look like him and are of a similar age.

I reflected on comedian Gina Yasahare’s video on social media about the invisibility of people of colour in the narrative and whom the media is showing as victims and heroes.

I thought about the hours of footage given to Captain Tom, nobly walking up and down his garden to raise money for NHS and the scant minutes given over to the story of the young Ghanaian nurse who died of COVID-19 in childbirth. I asked myself who would raise money to help ensure her newborn child had a stable future without her mother? I wondered if she’d been young white and blond would there have been rolling news coverage, celebrity tweets and possibly a concert?

I constructed a paragraph on structural and institutionalised racism and how these two forces have combined to create long lasting and deeply ingrained health inequalities and how this was a crisis waiting to happen.

I was going to explore how from mental health to HIV, from school exclusions to police stop and search, Black and Brown people are always in the higher numbers. Then breakdown that in-spite of what anyone tells you the reasons for these disparities can be traced back to the Transatlantic Slave Trade and colonialism.

But then I considered the social and cultural issues that might explain why more people from my communities are being infected and dying. What role does the fact that higher numbers BAME people live in poverty play? What is the impact of BAME people being more likely to live in deprived neighbourhoods and social housing with little access to outdoor spaces? Or how does living in multi-generational households affect social distancing? Does our carb heavy, spicy diet play a role? Is the plastic in hair weaves a factor?!?

Or how, after centuries of being lied to, it was easier for some of us not to believe early warnings but to listen to stories that this wouldn’t affect us? Was it easier to trust our friends and family online with their theories, cures and remedies than a media, government and institutions that have a long and chequered history of truth about Black and Brown peoples?

When Black and Brown people heard two French Drs suggesting possible tests, treatments and cures for COVID-19 be tested on Africans on the African continent, who can blame us for recalling the Tuskegee experiment and other examples of medical apartheid and experimentation on Black and Brown bodies.

I wanted to conclude with a light joke about how social distancing is nothing new for Black and Brown people. That through segregation, separate but equal, No Blacks, No dogs, No Irish, discriminatory employment practices, criminalisation, and most recently gentrification, white people have been engineering and practicing social distancing for many a year.

But nothing came to me. I could find no solution. No answers.

In fact, none of this surprised me. As the days went on and the death toll rose, as I heard about friends whose parents, cousins, colleagues and friends had died and worried about the health of those closest to me, I was less and less inclined to write. There were no words to express the grief, sadness and fear I was experiencing.

After years of writing, thinking, posting about social injustice I was blocked. What more was there to say? I self-diagnosed with #racialfatigue. And then I turned on my TV.

I try to avoid Good Morning Britain. Piers Morgan before or after coffee is torture no one should suffer. But I tuned into a debate about the disproportionate impact on BAME communities. To my surprise it was balanced and nuanced. All of the key points were made. And even Piers seemed to agree that structural racism ‘could’ play a role.

Then I looked at Twitter. And out of woodwork they came. “Why does it always have to be about race?” “Oh, that woman blames racism for everything” “What about other….” and on and on and on.

I then understood why I struggled to write, and I knew what my MPS needed to say.

What’s exhausting, what makes us angry, what frustrates us is that despite all the data and evidence, regardless of the human cost we still cannot talk about RACE. The blinkers are firmly on when it comes to any mention of the impact of decades of societal racism, both micro (your work buddies) to macro (that big institutionalised thing you always hear about but can’t put your finger on).

White fragility is such a powerful beast that any mention of the ‘R’ word gets the vapours of (not just Middle) England going. You can see the veins popping and the red faces swelling in the comments and tweets that tell us to go back where we came from. (My grandparents built this country. You’re welcome).

Want to know what repeatedly beating your head against a brick wall feels like? Present evidence and it’s correlating factors, throw in historical patterns and a couple of experts to dissect your findings and I guarantee you, Daily Express reading Bob from ‘Middle England’ will tell you it’s ‘stuff and nonsense’. It’s like watching a parent tell a child the sky is blue, but they constantly ask, ‘but why’?

That’s the experience of Black and Brown people trying to get the World to care about our lives seriously. Every. Single. Day.

It’s exhausting to tell people Black Lives Matter and have false equivalences made, your lived experience belittled, or worse not part of the narrative at all. Black and Brown bodies have been used, abused, experimented on, sexualised, fetishised, criminalised, traded, and violated for centuries. It should surprise none of us that we can now add a global pandemic to the list.

It comes as no surprise that no one seems to really care.

Our voices are hoarse from shouting at unopened ears that racism is a THING and has a real-world impact on millions of us every second, every minute, every day.

But to this social justice warrior that thinks Black Health Matters now more than ever, it just leaves me exhausted.

When words fail me, I go to my hero and literary genius Toni Morrison:

“Crude and crass as most of it is and, really, uninformed as almost all of it is, the discourse about race is important……the real conversation should take place among white people. They should talk to each other about that. Not with me. I can’t be the doctor and the patient.”